Human Computer Interaction (HCI) is one of the most important key elements in human and computer communication interaction. During the early days of HCI evolution, the interaction between human and computer was not user-centered and only focused to ensure humans are able to operate the computers to complete any given task. Thanks to the rapid development of technology between human and computing, HCI has expanded enormously in the early 1980s. While computing has changed significantly; mobile and ubiquitous communication networks span the globe, and technology has been integrated into all aspects of our daily lives [1]. With the development and widespread use of computer network technologies such as the Internet, HCI have move towards a new stage which is characterized by network and social design [1],[2].

World Wide Web is the premier applications on the global Internet with its key task to search for information using a search engine [3] and with the combination of mobile devices, internet and web technologies; mobile web have emerged to become the all-in-one personal assistant and information resources library for the modern community. Mobile web can be defined as web pages which are written in markup languages like CHTML, XHTML and WML, designed for, or particularly suitable for, consumption on mobile wireless devices such as cellular phones [3]. Since mobile devices with high technology specification now becoming a common marketing strategy and social attraction, data plan for internet access is no longer a luxury. Most of the latest smartphones need internet access to support and operate its application such as social networking apps.

Although it may look and sound simple in both logical and practical views, designing a good HCI design for mobile web is not an easy task. In order to achieve an effective and responsive HCI design for any mobile web or services, the designers need to have an outstanding knowledge and mature experience of the design principles, usability, capability and maintenance management of various kinds of mobile devices and web services to fully understand the behavior of its users.

The focus on HCI is now complemented by a focus on human activities interaction mediated by computer and network technologies [1],[2]. However, the ultimate goal of HCI research is still centered on how to design the computer to help people complete the necessary tasks more safely and efficiently [4].

Mobile devices can be considered as the new intelligent computer assistant in the modern society. People use mobile devices such as Smartphones and Tablet to read email, surfing on the go, store documents, hosting services, personal planner, work organizer and many other purposes. However, in mobile computing environments, mobile devices are constrained with limited functionality such as small browser screen, low bandwidth speed, limited computing power and many more which may restrict the services provided for mobile web surfing [5],[6]. Since most of current web pages were fully optimized for large screen desktops, physical constrains existed in a mobile devices will forced the content to scrambled in a smaller screen resolution. Plus, content loading especially for images and videos will be extremely slow in mobile web. These are few from many turning point examples on how mobile web could contribute to poor user experience and satisfaction factor while accessing any web content.

With the increased coverage of high-bandwidth wireless networks, and the availability of hand-held devices to browse the web over these networks, the mobile web is expected to become even more important in the future [3]. Thus, it was important to take in our considerations to re-look and reconsider HCI design to at least reduce most of the constraints available in mobile web development and environment.

There are many challenges which need to be clarified and overcome in the effort to improve mobile web’s interaction design. In this chapter, we will discuss six examples of current challenges in providing an effective mobile web interaction.

Although there were many approaches in providing a better user experiences, most of them are adaptive solution focusing more in creating different set of website design version to suits both larger and smaller screen which led to different view and does not give the same look and feel of the original desktop web site [6],[11].

Guirguis et al [6] also have proposed a prototype model based on Joomla CMS as a case study which offers browsing adaptation, media adaptation and use a smart technique with the template engine to minimize the processing overhead and reduce the amount of transferred data over a wireless channel to facilitate the web content production for both desktop and mobile web users without creating two versions of website. 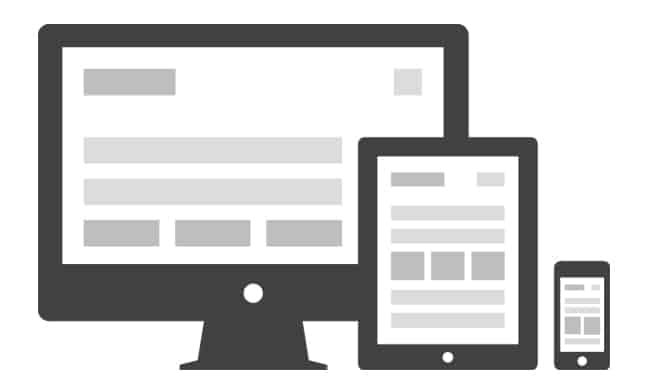 In recent web development, Marcotte have come out with a theory and practice of Responsive Web Design (RWD) in an article in A List Apart [12]; a web design community website with the special interest in web standards and best practices. RWD has created a strong foundation in web design evolution by focusing on the development of creating a responsive web design which are able to adapt, response and overcome most the mobile web constrains discussed above which is types of devices, screen sizes and browser compatibility.

RWD can be considered as a successful approach to utilize web design structure using CSS media queries to provide an optimal viewing experience from desktop PC to mobile devices. Currently, there are many RWD framework have been created and widely used to support and provide responsive web design such as Twitter Bootstrap [13], Skeleton [14], Foundation Zurb [15], Gumby [16] and others.

Mobile browsing has many limitations originating from its physical design [11] resulting to poor user acceptance and experience in accessing web content in mobile web. However, huge potential in mobile web need be to fully explored by first eliminating existing constrains and interaction challenges. This is where HCI fundamental and design principle comes into action. While there are several issues in mobile web can be tackled using numbers of existing approaches discussed in chapter IV, there are still other problems such as graphical images sizes and loading time which need to be explored.