In case you want to learn something about photography, you had better get to know the most vital element, associated with it. There are basically three main things in photographing; Aperture, ISO and Shutter speed.

Aperture among the three, is the most commonly discussed about since it is owing to the aperture that we see a clear photograph with vivid images.

Here are a few basic things about Aperture that would surely help you use the knowledge in your best advantage.

Aperture, in lay man terms is basically a hole in the lens to get the light pass through it, just like our eyes.

Cameras these days actually are designed just like the human eyes. To make things easier for you, let me explain it through the structure of our eyes.

Well, the front part of our lens is called cornea and its purpose is to bend the external light, it receives and pass it to the iris.

Now the iris, being very sensitive to the light, dilates or contracts according to the intensity of light and hence controls the size of pupil which basically is a hole that passes the light into the eye.

The pupil is actually similar in function to the aperture. Now the size of pupil basically determines the amount of light that can enter the retina.

Big pupil means, large amount of light will pass through and small one means less will pass; the same holds true for aperture.

In optics, the size of aperture is controlled by the iris of the lens and it is normally referred as diaphragm. It basically stops any and every light that does not passes through the aperture.

Now, coming back to photography, aperture is represented with “f” numbers (like f/5.6) which are referred as f-stops. 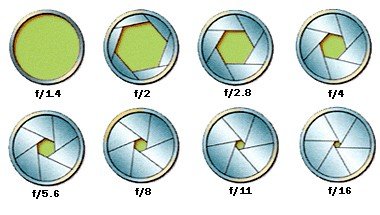 These f numbers are used to express the size of the aperture or in other words on how dilated or contracted the aperture is.

However, unlike how we normally use the numbers, f numbers are represented a little differently; the larger the f-number, the smaller the aperture and vice versa.

For instance, f/1.4 though seems smaller than f/2.0 is actually larger than the latter and even bigger than f/8.0. The size of the circle basically symbolizes the lens size of aperture; the bigger the f-number, the smaller the aperture.

How Depth of Field is related to it?

Now the vital thing to bear in mind is, though a large f-stop means smaller aperture but this also implies that the smaller the aperture, the more focused the image would be.

On the other hand, a small f- number will blur the background images a little and put the entire focus on the front ones.

The aperture size, in other words, directly affects the depth of field which is responsible for sharpening the images. 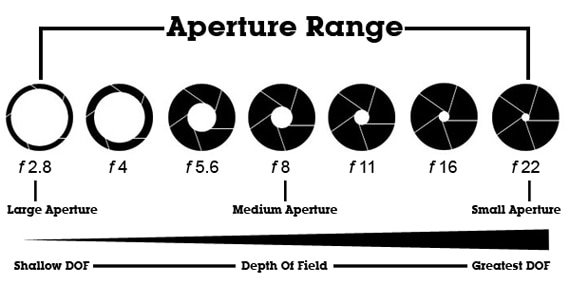 Large aperture enables more light to pass through and hence allows you to take photos even in dim light areas.

Plus it also implies that the photos will have remote background from that of foreground a bit by blurring the background and focusing the foreground.