The Clarity of the Edge

Many other brands of electronic cutters have frequent problems with the precision of their cuts. The edge of the paper frequently has rough edges or rips altogether. Fortunately, that’s not a problem with the Silhouette CAMEO.
In fact, it’s one of the things that the Silhouette is truly known for. The cuts are very clean, which produces pristine images. Shapes jump out and look professional, rather than homemade.

When it comes to its cutting mat, the Silhouette CAMEO scores a 4.5 out of 5. The matt is sticky, but not too sticky, so most types of fabrics and papers will stick to it perfectly. On the Silhouette CAMEO’s website, they say their mats last 5 times as long as Cricut’s. While this claim may seem unbelievable, reviews on Amazon and Best Buy among other websites definitely corroborate the claim. Even if it’s not 5 times, you can bet the CAMEO’s mat will last a lot longer than other brands.
The one downside to the cutting mat is that it doesn’t work too well with very soft fabrics. Fortunately, there are ways around this. First, you can just use a little bit of adhesive spray if you’re using soft fabrics. Second, you could purchase softer fabrics recommended by Silhouette, which are virtually guaranteed to work. Apart from this one minor factor, the Silhouette CAMEO’s mat is superior to its competitors in just about every way. 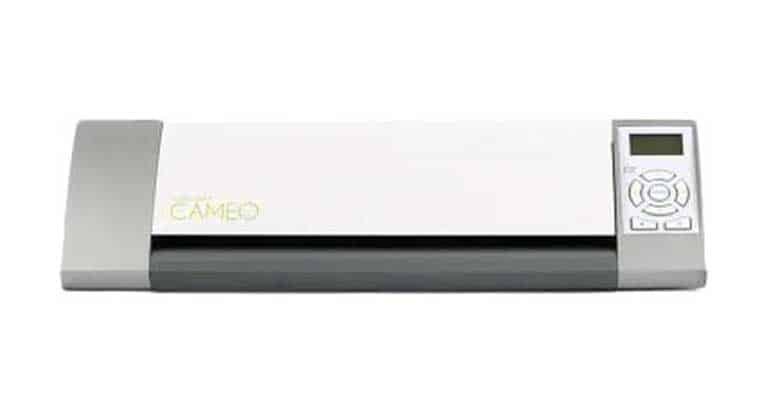 With the Cricut Expression 1 and 2, you have the cuts they provide you out of the box. Those are more or less your options. It’s difficult if not impossible to use other people’s designs, or to add more designs.

With the Silhouette CAMEO on the other hand, adding designs couldn’t be easier. You can simply go to any free website with vector art and download designs. You’ll be able to instantly print those designs by connecting your computer.

Alternatively, you can also purchase more designs online directly from Silhouette. If there’s a specific design you want, you can buy it individually, though buying individually can get expensive. If you tend to need a lot of different designs, you can purchase a subscription, which makes getting new designs extremely affordable.

In other words, though the Silhouette CAMEO comes with fewer designs out of the box, it’s far easier to get and add new designs. Even if you don’t want to pay a single extra dime for designs, you can simply download from the thousands of free designs on the web.

Another one of the Silhouette CAMEO’s strong point is the ease and accuracy of its positioning. With most other electronic paper cutters, you can’t actually see where the needle is. That makes it very difficult to position the drawing. You also can’t see how big the design will actually be once it’s finished. You have to just print it and see. That wastes a lot of time and paper.

The Silhouette CAMEO on the other hand makes this a piece of cake. Sizing is controlled digitally, so you can see exactly how big the printout will be on the screen, with on-screen rulers. This level of precision has helped spawn a whole sub-community of Silhouette CAMEO users who revel in creating paper crafts and models.

Because everything printed by the Silhouette CAMEO is to scale, you’ll be able to print out “ready to fold” objects that can easily fit into one another. You can construct elaborate castles, 3D greeting cards, unfoldable cupcake holders and more. Many of these designs can be found online, and it’s easy to create your own.